Scientific evidence through neuro-imaging has suggested that physical activity improves a person’s cognitive ability across all ages. Age related brain tissue loss is minimized. Existing cognitive ability is improved. People can allocate more attention towards the environment. Information can be processed much more quickly.

The human brain has an exceptional capacity when it comes tomodifyingits function and structure as per influences of experience and environment. Physical activity has played an important role at the time of biological adaptation. It ensured that humans survived through a number of catastrophic periods. During this time, for aging, exploration and defense along with cognitive skills were fully integrated to the motor operations of the body so that humans can survive. The hippocampus, a body part which has an important role in processing of memories, is highly influenced by many physical activities. Regions of the brain developed that controlled cognitive abilities. These adaptations led to adequate savings of energy so that a more complex and larger brain can evolve. Humans soon developed the capacity to walk upright and faster than ever before. All these were essential for survival.

Cognitive control means a subset of self-regulatory and goal directed operations which are involved in selection, coordination and scheduling of the computational process under lying action, perception and memory. The important cognitive processes are collectively referred toas “cognitive control”. They include inhibition, cognitive flexibility and working memory.

Research has revealed that regular physical activity led toa 50 percent increase in cognitive performance. Tasks needing larger cognitive control became much easier for the concerned individual. All these findings point toward the fact that physical activity helps an indi 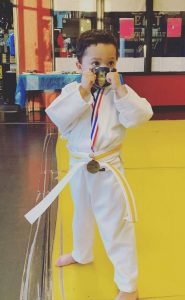 Please visithttps://elpasofamilymartialarts.com/for information about our martial arts schoolsclosest to you in El Paso, TX!